My Story With JY1 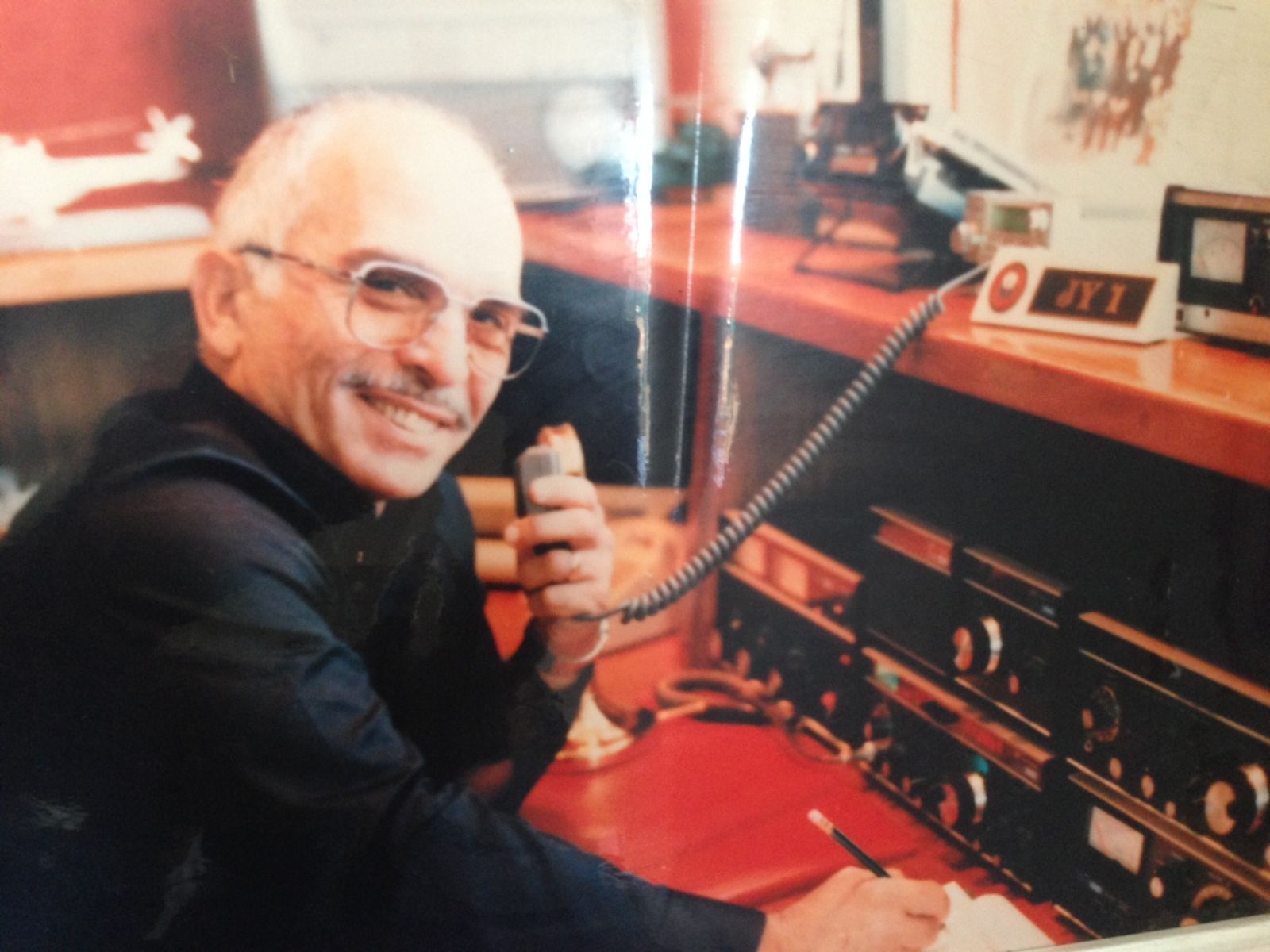 My story with JY1

As a young boy in my home country of Jordan, my father had fascinated me when he was receiving the Morse code from the United Press International station transmitting in CW Morse Code on the shortwave radio, my father was the head communication officer in the Jordanian Embassy In London England from 1953 to 1956.

I always wanted to be able to receive the Morse Code Like Him.

Looking for a better feature for his family, my Father decided to seek emigration to the USA.

We arrived in Chicago’s O’Hare International Air port July 9th 1977 & lived in Chicago, Illinois South Side, me and my two brothers attended school a month later and my father started a grocery store business.

While working in the store after school hours I got introduced to the Citizens Band Radio and was in love with it especially for the DX part of it.

Couple Of Years Later, our next door neighbor BOB was a Ham, his yard had a big tower and wires all over, we started talking about radio and communication and he told me about Ham radio and in fact the King of my country at that time will be on the next day and he will , Huh!!!! Sure I said in my mind, you are going to talk to his Majesty …… Sure you are.

The next day when I was coming in the house from school, Bob Called me from his porch and said to come in an hour because The King is going to be on the air.

It was my first time going into Bobs house and WOW!!! his radio room took my breath away, I fell in love instantly, we started to talk and he was explaining to me what this does and what this one can do etc. I could not help notice the CW key I asked does he know Morse code ? I told him about my father and I told him that I want to learn the Morse code, he said he would be glad to teach me.

Well a little later he said here he is by that he meant His Majesty King Hussein, I do not remember the band or frequency that his radio was set to but suspect it was a net on 20 meters maybe it was the Arabian Knights Net But Not sure, it sounded like a bee hive that’s a pile up Bob said a few calls later

Bob made a contact with  JY1 King Hussein of my home country of Jordan Bob exchanged reports and greeting and told his Majesty that he is with me a young Jordanian boy , I got on the microphone  nervously I told him that I was from Jordan he was happy and told encouraged me to study and get my own call sign, that day I felt like I won the lottery, we do not get to speak to his majesty that easy, actually its almost impossible to do that in Jordan.

Since that experience I started studying for my novice exam and Bob started to be my Elmer.

Not so much time later I passed my novice exam at the FCC. Building in Chicago and got the license by mail within a week where rite away went to Mom and asked her for some money to buy a Radio.

I asked Bob about which radio should I try to get he advised me to get something that I can build myself like the Heathkit HW-8 QRP Transceiver and then move to something bigger and better, Mom agreed to give me the money and had got a money order for $79.99 sent to Heathkit in the state of Michigan.

Not too long after I got the KIT and assembled it in a day and was on the air the next night on 40 meters CW and was able to make my first contact with VK3BYE .

My addiction to the hobby grew and kept growing.

In July of 1985 I visited Jordan, and got drafted in the Royal Jordanian Armed Forces where had to serve my draft time there.

While in service His Majesty JY1 visited the base that I was in and I got to see him face to face, I shook his hand and said JY1 de KA9PFU which was my old call sign then and my name, he remembered me and remembered Bob on  that QSO almost 4 years prior.

I was nervous the first time that I talked to him and now it is even worse the cat got my tong I could not make a complete sentence without stuttering, which he met with a smile.

He was as everyone knows a great and polite man. He told me that Ham Radio plays a big role in his life as it is a hobby that brings nations together for peace of the world. I finished my term &  returned to the USA in 1991, my KA9PFU call sign lapsed so I  took the test again and obtained KB9GSY .

I am now married to a beautiful wife and  have 3 young children try to dedicate most of my free time to educate anyone that wants to know about this wonderful hobby through the internet on our club website www.arabqrz.com where we teach Morse code and related amateur radio subjects to who ever becomes a free (no fee’s ) member with us.

One of our recent achievements in the club is two newly licensed amateurs that are members from E41 Land , Eng. Mai Temraz E41MT & Her Husband Eng. Walaa Temraz.

Amateur Radio Is a way of life to me it is not just a hobby but is an important part of my life.

King Hussein JY1 was a big part for me in Ham radio So in turn I decided to have a special event station in his memory every year with the first starting from Feb. 2nd  2013 till the 28th , in the Feb. 2014 Special event other Hams participated in the event and special QSL Cards were made to commemorate the occasion, Some of the stations are

In Feb. 2015 Participating stations are

My words to a king, you where an asset to Amateur Radio we all miss you, to Bob (WD9FEN) thanks for all the time spent teaching me the king of hobbies Ham Radio you are always missed.